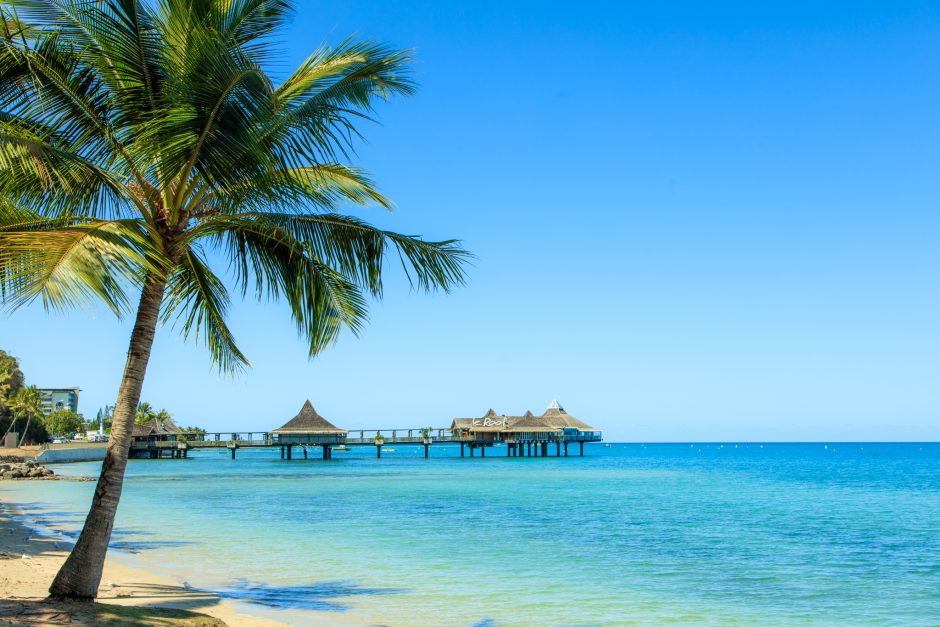 The main industry in Noumea has predominately been Nickel mining, so tourism in the past hasn’t been a real priority. The land is unsuitable for cultivation so food and produce is all imported. This means that not only is it really expensive, there didn’t seem to be a great importance of fruits or vegetables being available.

In the 1800’s the French colonized New Caledonia so it has a very French feel about it. It feels kind of strange being so far from France (and so close to Australia), but I often had to remind myself I wasn’t actually in France and I found this kind of cool. Obviously French is the predominant language. Me being me, prior to visiting I researched the hell out of Noumea online and one thing that kept coming up was that being a French speaking country, very few people spoke to English so be prepared. I didn’t find this however. I do know limited French from my school days and this came in handy, but most people spoke pretty impressive English. One of my first questions was always “parlez vous anglais?” (do you speak English?) The response was often “little” but it was always enough to communicate. I stayed in what seemed like the tourist part of Noumea and most of the restaurants had menus in both English and French so again, not really an issue. I always think it is good manners to make some effort to speak the language when in a foreign speaking country, but also good to know that language wasn’t really a barrier.

The other thing that there was a lot of warnings about, including big signs as you arrive at La Tontouta Airport, was the mosquito problems. “Make sure you have bug spray”, “watch for mosquitos” etc. Perhaps it was the time of year that I travelled, but despite taking Aeroguard with me, it was never used or needed.

Right in the south of Noumea is Anse Vata Bay. It can get quite windy on the bay so is a really popular location for Kite Surfers from all around the world, the beach however wraps around and is really protected. The hotels around here from what I saw were the pick of the island and the main street seemed to have the pick of the restaurants and of anywhere I visited, felt like it was aimed at the tourist trade. To be honest, from what I saw, this seemed to be the best of Noumea itself.  The city had markets and some shopping streets, but I could take or leave them, I didn’t find anywhere outside Anse Vata Bay on the mainland that I would say you must see.

As far as the beaches, even now when I Google images for New Caledonia, or in the town itself, all the images are of the outer islands, not Noumea itself. The only beach worth visiting is at Anse Vata Bay, the rest were pretty average. And sadly, on the Bay, although the water was clear and nice to swim in, nice snorkeling with star fish, turtles etc the beaches were brown sand littered with little rocks and loads of broken glass and cigarette butts. For some reason, the glass thankfully is green so on a positive, it stands out so you can avoid stepping on it, but on the negative, it stands out so it’s obvious how much glass there is on the beach. Of course it’s my job to visit a location and bring out its best and the beaches in Noumea really were beautiful, it was just so disappointing how they were let down by such small things like butts and glass, especially when it would be so easy to clean up.

Which brings me to smoking. Visiting a foreign country you really do realise how lucky we are in Australia with our smoking laws. They are so strict that I think it’s pretty much just all too hard to smoke. So visiting somewhere like Noumea, especially with the European influence, the smoking seems to be magnified. Not only were there cigarette butts littering the beaches and streets, but also smoking was allowed in most places so if you find it offensive, firstly make sure you ask for a non smoking hotel room (nothing worse than the stale smell of cigarette smoke when you don’t smoke). As far as restaurants, I found it quite unpleasant to be about to take a mouthful of the delightful French food only to have a cloud of smoke surround me. Some establishments did have non smoking areas, but most, you just had to be prepared.

The other thing that you really need to factor in when visiting New Caledonia is issues with telephone and internet. If you are with Telstra, they have recently withdrawn their international data roaming in the region. What this means is that calls and internet are SUPER expensive and most hotels seemed to have really limited free Wi-Fi available. Some restaurants did have free Wi-Fi so our solution was an afternoon cocktail each day to catch up on any emails etc using the service. It was kind of good because it made you disconnect, but we had one issue with our return flights that became difficult to manage due to the limited service.

Being a French colony, with a major French influence, the food and wine were fantastic. Very expensive but really amazing. Lots of fresh seafood and interestingly, they appeared to get all their meats etc from New Zealand so they were top quality. With the language barrier and my very limited knowledge of French wine, at each restaurant we visited, I asked for “vin blanc s’il vous plait” (white wine please), and left it to the waiter to bring me his recommendation. I’m pretty sure I had something different every day and not one wine disappointed me. They even ran out of white wine at our afternoon cocktail venue (how does that happen!), and so I tried a Rose, and this was lovely.

When it came to food, we had a few hit and miss meals, and some really overpriced meals that I didn’t think were worth it, so ended up eating mostly at the same places. Malongo Café Store was our afternoon hang out. Free Wi-Fi, great breakfast as well and friendly service. Located on the Promenade Roger Laroque outside the Hilton. Pizza and Pasta right next door was great value meals and friendly service. Maxi Juice for fresh juices – pretty much the only time we had fresh fruits, and Au Pain d’Antan Patisserie for the most amazing French pastries. Amorino Noumea was the most divine ice-cream – perfect for any time of day. Popular not only for their delicious flavors, but also their beautiful “flower” cones, ice-cream shaped in the cone to look like a flower. Such a unique idea. I cant believe it hasn’t been duplicated elsewhere. They also make delicious waffles and crepes which are a must try. As far as things to do in Noumea, I would recommend taking day trips out the islands. Ile aux Canards (or Duck) Island is only a short boat ride out from Anse Vata Bay, its so close you can see it from the shore and could almost paddle out there on a kayak. Saying that, there are plenty of water taxi’s to take the short 5 minute ride and it’s relatively cheap. There is also Masters Island a little further out, which there was little information about, but worth the trip. Nicer beaches, less people and a café and restaurant (although these were really expensive). Another must visit on all the travel sights is Amedee Island. We unfortunately didn’t get a chance to get out there due to time constraints, but several other friends on our trip did and said it was even more impressive than Duck and Masters. All three have food and drink as well as bathroom facilities and are a nice change from the main island, with clearer water to swim in.

One of my favourite experiences in Noumea (and no it’s not because two of my favourite things were involved) was the wine and cheese tasting at Domaine Du Faugourg.  A quaint “house” in the heart of Noumea with a really impressive bar, this was a really fun afternoon of tasting some of the most delicious cheeses imported from France and a great variety of wines, all available for sale.  The thing that really stood out for me though was the exceptional service of the staff.  Very friendly and helpful, the best I had on my whole trip. The other popular thing to do whilst visiting Noumea, and amazingly one of the cheapest, is watching the sun set from the beach.  Facing west, it means the sun sets over the water and each day was different and more beautiful.  Great way to finish off a day at the beach! Getting to New Caledonia from Australia is surprisingly easy, it’s only a short 2 hour direct flight from Brisbane, but ……  I will only be brief about this because I am still pretty frustrated, I flew Air Caledonia.  I would put them at about a Jetstar standard.  No frills, nothing great but it’s only 2 hours.  Business class is pretty much like domestic business class here in Australia.  On the flight over, it was a flight share with Qantas, so I actually flew on a Qantas flight.  What really really let them down was the return flight.  Due to a pilots strike (yes I understand these things happen and are out of the airline’s control) the way the airline handled it was appalling.  Lack of communication, not telling passengers the flight had been cancelled, difficultly contacting the airline and communicating due to language, and then being flown to Brisbane via a 5 hour stop over in New Zealand all added to the frustration.  At the end of the day, the lack of communication and customer service from the airline lead me to never flying them again and not recommending them to anyone else.  Things happen, but the appalling way the airline handled it was inexcusable.

I have heard rumors that with the Nickel industry declining in New Caledonia, they are placing more of a focus on their tourism industry. Noumea is a beautiful location and has so much potential, but as far as selling themselves as a serious tourist destination I believe they have a long way to go. For a location that is so expensive, the lack of tourist facilities and definitely lack of customer service left me wondering why I was paying such high prices.  I have stayed at many 5 & 6 star resorts around  the world and with that I think comes the expectation of a certain level of service.   In the current state, I would recommend Queensland, (or even Fiji), over New Caledonia. The beaches are in my opinion without doubt much better and you avoid the standard challenges of overseas travel like passports, foreign currency, international travel times etc.