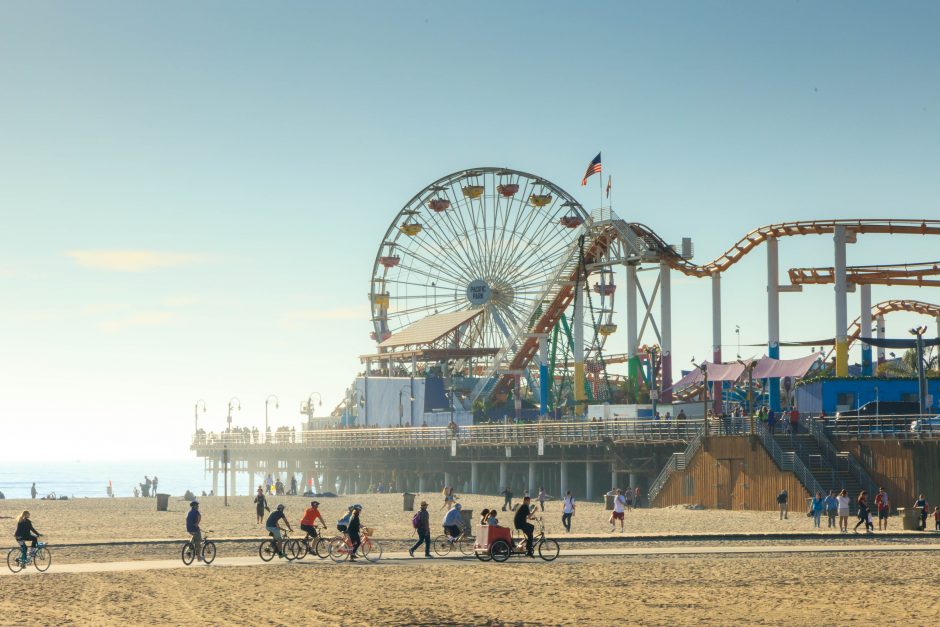 Los Angeles is such an easy destination from the East Coast of Australia.  It’s a direct flight from all the capital cities and the gateway to the US so makes for the perfect stopover.  Los Angeles is all about the chilled vibe, glamorous people and Hollywood lifestyle.  You can’t help but get drawn into the allure of it all. The one thing that you notice about LA is the large boulevards lined with tall palm trees.  It’s quintessentially LA, something that you don’t find anywhere else.
Los Angeles is a sprawling city with over 4 million people, its pretty overwhelming when you first visit.  It’s the home of the movie and television industry in America with Fox, Paramount, Warner Brothers and Universal Studios all located here with many offering tours for the public.  But there’s also the beach and cafe culture in LA with Santa Monica, Venice Beach, Malibu and more.  It’s a great place to visit summer or winter with a year round warm, balmy climate. If you’re only visiting LA for a short time, like me, here’s my suggestions on some of the must do’s whilst in town:
SANTA MONICA PIER
This is obviously iconic Los Angeles.  You would have seen a million pictures of it as well as in numerous movies.  There’s a reason why it’s so popular.  Firstly, its the start of the famous Route 66, so that’s pretty cool.  There’s a great outdoor shopping mall nearby to have a wander thought with great local and chain stores.  The Pier itself has plenty of atmosphere with buskers, amusements and food stalls.  Very busy but loads of fun.  The beach itself here is sprawling white sand that stretches forever from the pathway to the water and if the weather is warm, take a towel and some swimmers.  And finally, from here you can hire bikes and ride the wide pathway down to Venice beach which is fantastic for people watching and also the location of muscle beach, the outdoor gym.  Along the way there are loads of stores to stop by for a look.  You can easily spend a full day down Santa Monica way, so depending where you are staying, it’s a great day out. RODEO DRIVE
You have to allow yourself the “Pretty Woman” moment and take a walk down Rodeo drive. It’s all the high end shops, oozing glamour and money.  Even the cars in the street are luxurious.   You only need about an hour here as realistically, you’re not likely to do much shopping but its only a short walk to South Beverly Drive where there are some great cafes, including Earth and Charmount, both really nice, but can get busy so be prepared. HOLLYWOOD SIGN/HOLLYWOOD BOULEVARD
It’s another must do, cheesy tourist pic, but you know the saying, when in LA …….  I actually had a really great taxi driver (or a really smart one), who took me on a mini tour of Hollywood when I asked for a lift there.  He even drove me up to the best location to get a snap with the sign in the background.  Locals are generally very helpful and willing to give advice so I would suggest asking them.  A walk down Hollywood Boulevard is entertaining, there’s lots of street performers and things to see and do, don’t forget the Chinese Theatre, but you can’t miss it.  Whilst wandering the boulevard, beware not to get talking to the street performers too much though, because often you think they are being super friendly when they end up trying to sell you something. THE GROVE
The Grove is one of my favourite places to shop in LA.  It’s an outdoor kind of mall, with big stores like Nordstrom and Apple, but also a great farmers market with all sorts of quirky souvenirs, foods and treats.  The developer who originally built the Grove wanted it to be “old worldly” so the cobblestone streets and trolley car add a charm to the precinct.  It’s definitely a must visit and hugely popular with tourists. UNIVERSAL STUDIOS
I’ve saved the best until last and also my best tip.  Universal studios is fantastic.  Real live television shows are filmed here as well as movies, so its a working production studio but also has a great theme park.  What they do really well here compared to Disneyland is diversity.  You can spend a day at Universal touring the movie studios, seeing real live movie sets and experiences as well as having the fun and adventure of a theme park with rides, experiences and shows.  Saying that, it gets really really busy. Particularly if you are visiting in holidays periods and queues for rides can be upwards of 90 minutes.  Bit hard to swallow when some rides only last less than a minute.  On recommendation, we booked into the VIP Experience.  This was USD400 per person (around AUD550 by the time you paid the CC fees etc), but before you choke on the price, let me assure you, it was worth every penny.  There are so many inclusions, it really does make it worthwhile. You get breakfast on arrival, and lunch is a full buffet which was one of the best meals we ate in LA, pretty much anything you could imagine from steak to lobster and dessert, all in a private VIP only dining room.  You are paired up with a VIP tour guide who takes you on a tour of the studios, including inside on the working sets, a behind the scenes look at the Props building (so cool) and tours of areas not open to the general public.  After this, you are taken on a tour of the theme park with VIP access to all rides.  These means whilst others are queueing for their 90 minutes, you walk straight the front and onto the ride.  Special seating at all the shows and finally, once the tour guide finishes showing you around the whole park, you are free to stay as long as you like continuing to use your VIP access ticket to jump queues.  And on a final note, before I go on about this too long, the reason we didn’t hesitate with this pass was after a trip to Tokyo Disney where it was so crowded with minimum 3 hour waits for rides – not a fun experience at all.  At Universal, there was one particular ride we all loved and we went on it 3 times in a row, all the the space of around 15 minutes. Finally, quick run down on rides,
Harry Potter World – Flight of the Hippogriff – outside coaster ride.  Great fun, not very daring so fun for all ages.  Just a bit short – around 50 seconds
Transformers 3D – on a ski lift type seating, mixture of 3D and flight simulation
The Mummy Ride – pitch black dark indoor roller coaster.  Another favourite.  Fast and scary as you couldn’t see where you were going
Jurassic Park – typical slow gentle water log ride finishing with a 84ft plunge down a waterfall.  Beware, you do get wet
Despicable Me Ride – 3D simulation
Walking Dead Ride – like a haunted house.  Very dark with zombies coming out and reaching for you.  Really frightened a lot of people but loved this one
Special Effects Show – really interesting.  Interactive with audience guests chosen to be part of the demonstration.  Demonstrated optical illusions in film finishing with a stunt man being set on fire.  Great show without spoiling any secrets.
Simpson Ride – another 3D simulation ride.  This was my least favourite.
Water-world Show – my absolute favourite.  Amazing show.  Believe them when they tell you the front few rows will get wet – and its not just a little bit.  They enjoy proving people wrong.  Sit further back if you don’t want a soaking. FINAL TIPS
Where To Stay –
For this trip, we chose the Intercontinental in Century City.  Having stayed at Intercontinental hotels in the past, I thought this was a safe option as the standard is generally pretty good and I wasn’t disappointed.  We had a large suite with huge bathroom and balcony overlooking downtown LA. The hotel was really reasonably priced and great location.  Only around 5 minutes from Rodeo Drive and Beverly Hills with a Town Car provided to drive you to close by locations.  Also located next to Fox Studios (which I didn’t realise otherwise I would have booked a tour there as well) and one block from a huge Westfield Shopping Centre that has everything including some great family style reasonably priced restaurants.  Great onsite restaurant and pool and the service was first class.  So glad we booked here.  Will definitely stay again next time in town. Transport –
Arriving in a foreign city, often after a long international flight the last thing I want to do is mess around with hire cars or taxis.  For this trip, I got in touch with Mears Global Chauffeured Services for transport and have to say, they were first class.  From home in Australia, I booked return transfers from the airport to the hotel in Los Angeles, San Francisco and Vancouver.  Every driver was on time, waiting for us at the airport arrivals hall (or hotel lobby), courteous and all had water, magazines and even sweets for the children in the car – a really nice extra touch (and the children loved it).  The cars were clean, drivers knowledgeable and friendly and it took one less bit of stress off me.  Highly recommend this company and was all easily booked and arranged prior to leaving Australia at reasonable prices.
Taxes –
Particularly coming from Australia, beware not only of the exchange rate (currently everything you buy is basically 30% more than the ticket price due to the exchange rate), but also taxes.  Not sure why they do this, but prices are displayed before tax.  I was caught out a few times thinking I had worked out the total price, exchanged into Aussie dollars, only to have a further 10-12% added at the checkout for taxes
Tipping –
As most travellers are aware, tipping is still expected in the US for anything from hotel staff, to drivers and restaurants.  It’s anywhere between 10 and 20% but usually they expect more like 20%.  It can be kind of annoying when the service doesn’t warrant it, or when you consider that staff are just carrying out the job they are being paid to do.  My thinking is usually I only tip when I feel it is deserved and the amount based on the level of service.  But you do have to beware as adding tips to everything quickly adds up.
Finally, a couple of things that I didn’t get a chance to do this visit to LA but would have like to is take a sunset Helicopter tour of the city, there are a number of tour operators offering this service so just google it, but it would be incredible so I would suggest looking into it.
Taking a tour of the The Getty Centre Museum.  Not only is this an amazing building to visit, located on the top of a hill above west LA, but it is filled with European masterpieces, photography and art and its all FREE.
DisneyLand of course is a must at least once in your life, its a great place to visit.  I went on the last visit so chose Universal this time around.
If you would like to see more of my images, or hear more short stories, follow me on Instagram and Facebook @JulesIngall